The great mountains surrounding the empire of men are full of fierce monsters, goblinoids of all sorts and bitter weather.
Few men choose to live under such conditions but those that do are as rugged as the mountains and as fierce as the beasts that surround them not to mention generally drunk on a variety of distilled liquors.
Some are mere bandits and ruffians no better then Goblins and Orcs but most are god fearing men and make hardy allies for both the dwarves of the mountains and the mighty realms of men.

Here is my envisioning of a band of Grey Mountain highlanders.  Made from the the Oathmark generic humans. I was tempted, as most people seem to be, to change their shields out with rounds ones.  However I decided to stick with the square shields as the shape is a little reminiscent of the square Pictish shields that shows up in art work. Painted in lots of yellows, greens and some plaids with an aim of giving them a more generic Celtic/Gaelic look with a fantasy flare. Added a few heads from Fireforge miniatures and their captain and bagpiper are from Antediluvian Miniatures Galloglass. 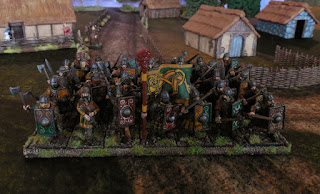 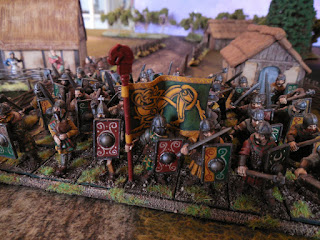 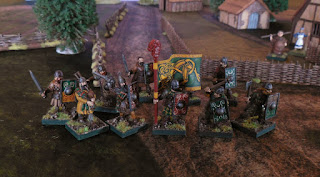 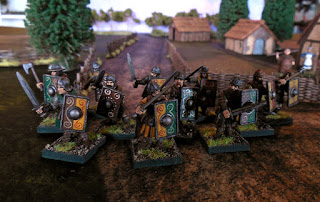 I have a second unit of these fantasy Highlanders I am working on using FireForge Scandinavians. Given the holidays are slowing progress down a bit hopefully in the next month or two I'll have them finished.


Since I had them out, here's a quick pic of the Perry Miniatures medieval cottage.  Its a nice model but a little bit too pricey for what you get.  The smaller houses in the background are from Renendra, nifty little models and much better priced. 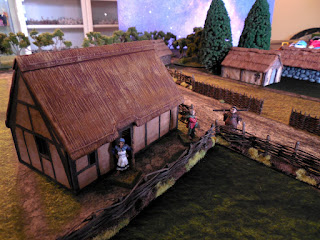 Email ThisBlogThis!Share to TwitterShare to FacebookShare to Pinterest
Labels: Friends and Foes of Orcs, Miniatures